About grazing behavior and genetics.


It's one of those lovely wet and damp Irish days. These new lambs I bought recently are surely something. I have to say that even being so small and young they graze so much better than their distant inbred cousins, the dreaded Friesians.
Those East Friesians are hopeless. Get one if you want a pet sheep, because they are totally sweet and tame but stay well away from them if you want something to graze that little bit of waste land you have on the farm. Jeez they are hopeless. They won't touch anything that looks different from lush, green, tasty, fat grass.

On the other hand, the F1 crosses Lacaune x Friesians lambs are all over the place, on the ditch, on top of the brambles, inside the gorse, within the reeds, you name it, you'll find a lamb eating it. It's a pleasure to look at them gnawing at pretty much anything belonging to the plant kingdom. Being F1 crosses they also conserve that tameness typical of the "Hopeless Friesian sheep".

Another thing they do differently is looking for shelter. They will pick the best spot, while the Friesians look like someone trying to protect himself from rain with a leaf.

Ah! do I love genetics!

Fitness is what you loose first when you apply artificial genetic selection to animals. The reason is simple, there is no longer any natural selection pressure to keep there those genes badly needed to survive and thrive in nature, where there is no one to protect you from predators, to supply you with plenty of food and to provide you with shelter and clean water.
The more you push selection for a certain trait, the more you lose fitness in the population.
The exact definition of fitness is the capability of an individual to reach sexual maturity and generate fertile progeny. Basically the capability of passing down your genes to following generations, and of course it has a meaning only in wild and feral populations, in fact domesticated animals cannot choose who will reproduce, their owner is the one to decide who is fit to reproduce. Nevertheless they conserve a certain degree of fitness. An extreme example of this is the Bulldog, where fitness=0. Bulldogs are totally incapable to copulate because they have been bred so wrongly. When they manage, they cannot give birth without a cesarean.
It also depends on the criteria you use for selection. Nowadays selection is carried out with a bit more insight compared to the '80s when a single trait was pursued (quantity of milk as opposed to weight at 60 days). So nowadays you find inside genetic indexes also good things like "leg conformation", "udder shape", "feet index" and so on, all traits that have a positive effect on the fitness of the animal.
This also means that you cannot push as much for "milk quantity" anymore, but that's ok, because that little bit extra came at a big cost in terms of health and animal welfare.

So, Friesians have been selected with very little in mind in terms of fitness and very much towards the one goal: lots of milk, because they were traditionally reared in small flocks, housed and well fed. Furthermore there is no tradition of cheese making from sheep cheese in Friesland, so milk is particularly watered down (little solids in it).
Lacaune on the other hand, have been selected in France, with an eye towards fitness and lamb weight. They are reared on marginal land (Roquefort-sur-Soulzon), hence they need to be able to feed on rough material and thrive in Mediterranean semi-arid conditions. Furthermore their milk is traditionally used for cheese making (Roquefort) and is produced in volumes slightly smaller than Friesians' but with more solids, which is what you need if you make cheese. You cannot make cheese with water!

It's nevertheless quite shocking to see the difference with the purebred Friesian lambs I had last year. Long live the Lacaune cross!! 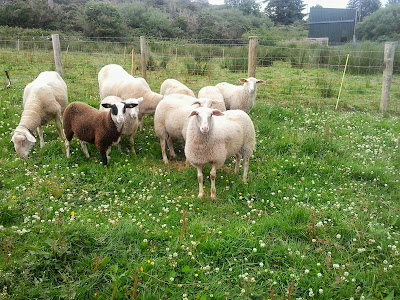 Ok, the business course I'm attending says blogging is still cool. I guess anything that can help the business is good.
I got the new lambs on Tuesday, these little rascals are Lacaune/friesian F1 crosses and you can definitely see quite a difference from the tame, sweet friesian lambs I had last year. I spent the night chasing them off the porch, I had to bring inside all my plants and this morning, when they woke me at 5.45, I found them all hidden under the porch.
There is also one beautiful black friesian cross. She is very cute, I couldn't resist when I saw her.The rams are happy to have some company. 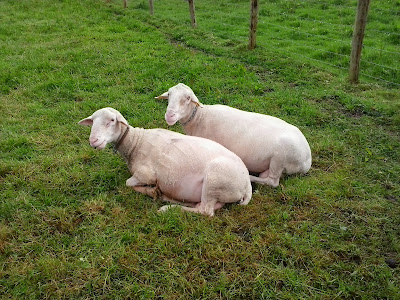 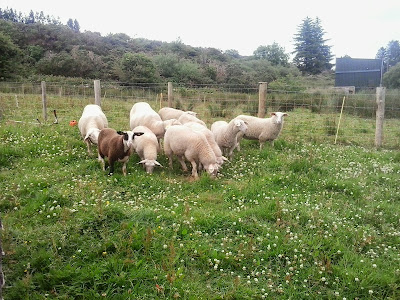 I am thorn. I find it extremely difficult to blog, as you can see I have not posted in aaaages. Since I have started to use google+ it seems to me that blogger is a bit outdated as a platform to share content. But I do understand at the same time that not everyone is on google+ and Rowena posted a comment asking for more updates so here we go.
Things are rolling, spring is in but we still get some very rainy weather, it is Ireland after all. The sheep are all dry and I am not making sheep cheese this summer, on the other hand I am trying to make a blue from cow's milk.
I have a new ram. He is called Big Fecker (as opposed to LF) because he is clearly bigger. His balls are massive! No wonder LF was sterile!
I have been doing some relief milking for a local dairy farmer. It is good work out and I am loosing my cheese handles :)
It is hard work and I cannot possibly understand how these people do it on a daily basis. 5.30 to 11 and then 4pm to 8.30pm. And that's just the nilking!
I am also looking into grants opportunities but it looks like chances are slim.
Concubine had bloat and took a while to sort out and Selvaggia had trouble with her front feet for a while.
I have also started making beer, inspired by the recent visit of a dear friend. The first batch was very good (from a kit), second batch not as good but from grains, so I was quite proud of it anyway. Third batch is bubbling away at present.
I am hoping to get started with the ground works for the cheese lab next month. For now enjoy some pictures. They are quite random, from shearing to beer making. Enjoy.

I'm feeling very lazy today. It's cold and although I managed to do a few things this morning, I now feel like just sitting tight and watch the birds on the feeder.
Good news is that the ladies feet are getting finally back to normal after continuous and assiduous managing for the past 3 months.
Another good news is that what seemed to me like a confused and homogeneous mass of coal tits on the bird feeders, it's actually a bit more diverse ensemble.
There is at least a blue tit, a great tit and a goldfinch. They are just a lot more shy than the bloody coal tits and you need to be patient and have the dogs inside to see them. Especially the goldfinch. On the ground there is a Dunnock and a couple of female chaffinches. I've seen the male at times too. Of course, checking on everyone and a bit everywhere, there is the Robin.
I had a couple of Pied wagtails for a long while but I haven't seen them recently.
I also haven't seen the tiny Wren in a while too.
The two magpies are always there when the sheep are around, not to mention the blackbird, Pepe's greatest enemy.
Posted by Jonzie at 17:02 1 comment:

Email ThisBlogThis!Share to TwitterShare to FacebookShare to Pinterest
Labels: Birds

Remember how I said that the ram had serviced all the sheep and that I'd put him in again just in case? Well, it turns out Little Fecker is not that good at fucking, or better, he's not that good at getting them pregnant, because surely he's applying himself a lot.
The result is that I might have as little as only two sheep in lamb (Selvaggia and Concubine), but hopefully the third time around he managed the other 3.
My mistake, I left it too late and when I realized that he didn't work it was too late to get another one. If I went to get another ram now I would have lambing in June, which means milking until January. No way Jose!!! Better be barren for a year, especially now that we only have 4, hopefully we'll make treasure of my mistake and won't do it again.
There is a chance that LF is just inexperienced, that the Frisian sheep are a tiny bit too tall (in fact the only 2 that are not on heat again are the shortest ones), or that LF is not mature yet. Truth is that probably he is infertile but I like him so much that I'll try to keep him, possibly as a teaser ram. Way to go Little Fecker!